Founded by Daren Young more than 30 years ago as a commercial paving contractor, Fremont, Calif.-based DRYCO started a concrete pumping division in July 2015. Young hired industry veteran Anthony Ventimiglia as manager of the new division, enlisting his help to build it from the ground up.

Since DRYCO’s concrete pumping division was established, it has placed more than 75,000 cubic yards of concrete and has many projects in the works, including one of its largest, a mixed-use condo/retail job in Santa Cruz, Calif., called 555 Pacific Avenue. To place concrete for the job, DRYCO used its two Putzmeister 36Z-Meter Truck-Mounted Concrete Boom Pumps and brand new Bridge Maxx Concrete Transit Mixer—the first Putzmeister mixer to be purchased in the state of California.

The new four-story development, located along the beachfront, will comprise 94 housing units, a ground-floor restaurant and retail shops, and underground parking. The project’s concrete contractor, Palo Alto Concrete & Construction, retained DRYCO to place the 8,700 cubic yards of concrete required for the building.

“We chose DRYCO for this project because of the company’s outstanding reputation and quality pumping equipment,” explained Erik Garfinkel, president of Palo Alto Concrete & Construction. “We’ve been really happy with the decision.”

DRYCO began concrete work on 555 Pacific Avenue in June 2016, kicking off with three large mat pours for the underground parking structure, totaling 4,000 cubic yards. The company’s new concrete transit mixer was incorporated into the rotation of trucks, while the two 36Z-Meters placed concrete for each eight-hour pour.

“The two concrete pumps have performed flawlessly and have enabled our company the confidence to commit to fast-track scheduling,” said Garfinkel.

With the foundation in place, the crew is in the process of pouring 150 structural columns. Next, they will place concrete on the pan decking for each floor. Concrete work was anticipated for completion near the end of 2016.

Located in the heart of Santa Cruz, upon completion in early 2018, 555 Pacific Avenue will offer residents and businesses new space in the high-demand beachfront community. The 34,246-square-foot, mixed-use building sits at an intersection that connects the vibrant downtown Santa Cruz district to the world famous Santa Cruz beachfront area—a prime location in a beautiful city.

One of the biggest challenges DRYCO has faced on the project is working around power lines that surround the construction site. During concrete placement, power to the nearby lines is shut down and diverted.

The team has been working around the lines, while ensuring all safety precautions are taken. The flexible Z-Fold booms on the 36Z-Meters have been critical in getting concrete to where it is needed, at the same time maintaining more than the required clearance from the lines. Each machine uses X-style outriggers and features a 116-foot 10-inch vertical reach boom.

“I don’t know how we would have gotten around all the power lines without the use of the Z-Fold boom,” said Ventimiglia. “Our operators have had to be extremely precise with the boom placement, and the design of these machines have enabled us reach every corner of the job site.”

Like many businesses, DRYCO has evolved significantly over the past three decades. Twenty years ago, the company added a concrete division, in 2009, it added a fencing division to its suite of services, and the concrete pumping division is its most recent addition. Dryco’s team, including Kent Hudson, its concrete division manager, hired Ventimiglia to head the division given his proven experience in the field.

“We have had a long history of working with Anthony on various projects over the years,” said Young. “He’s always been a guy we could count on—and in this industry, reliability is critical. We were confident hiring him would be a worthwhile investment and he’s already made a huge impact on the new division.”

After three decades in the business, Ventimiglia felt strongly about the type of pumping equipment he wanted to purchase; the company bought the two 36Z-Meters and two Thom-Katt® TK 70 Trailer-Mounted Concrete/Shotcrete Pumps to kick off its pumping venture. Less than a year later, in order to obtain concrete on demand, DRYCO invested in its concrete transit mixer.

“I’ve been around Putzmeister pumps my entire career and have had great experiences with the company’s technical and parts support and friendly staff,” said Ventimiglia. “I’ve also found their machines to be extremely user friendly. The new models just keep getting better over the years.”

“When I heard about the company’s new line of concrete transit mixers, I knew we had to have one,” added Ventimiglia. “It has offered such great products in the past, and we were excited to own the first one in the state. So far it’s been performing really well.”

“I’ve been around Putzmeister pumps my entire career and have had great experiences with the company’s technical and parts support and friendly staff,” said Ventimiglia. “I’ve also found their machines to be extremely user-friendly. The new models just keep getting better over the years.” 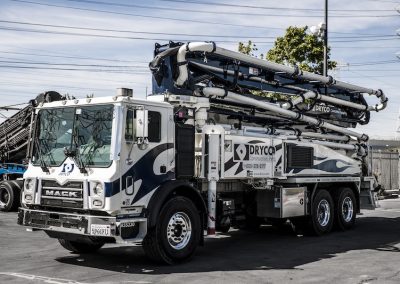 DRYCO recently invested in a Bridge Maxx Concrete Transit Mixer—the first Putzmeister mixer to be purchased in the state of California. 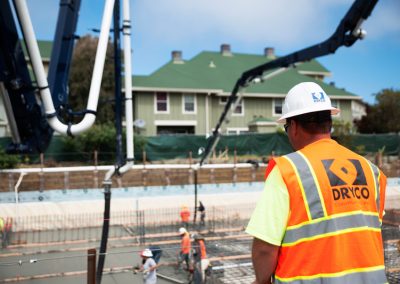 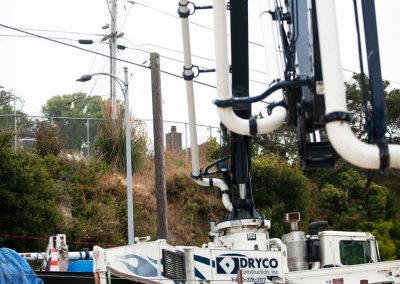 The flexible Z-Fold booms on the 36Z-Meters help operators work around the numerous power lines surrounding the job site. 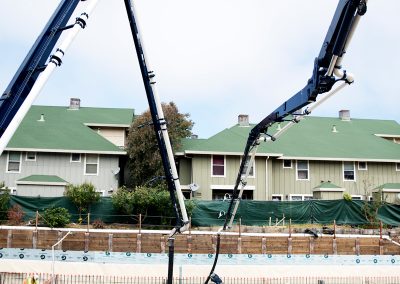