Incredible 3D Innovations: 3D printing technology is providing the construction industry with a more affordable way to do business. 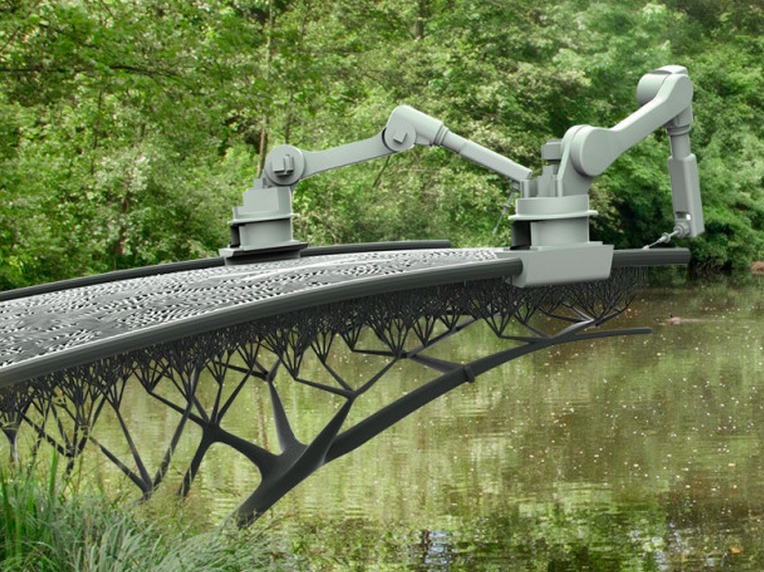 There is no doubt the way we are building homes, bridges, and roadways is changing. There’s more influence on technology than ever, and the newer use of 3D technology is simply no different. What if you didn’t have to wait for parts to be manufactured, receive them, and then find out they were just a fraction off in size? With the precision, speed, and quality of 3D printing, even the most complex and innovative structures can be created. Take a look at some of the most impressive projects taking place now (not in the future) using this technology.
3D Printed Excavator
Perhaps the most impressive finished project today is the recent completion of a 3D printed, construction excavator. This is not just a toy and not for small projects. Rather, it is a fully functional excavator usable on large scale projects of all types. More so, it is considered the first project of its kind using high-quality steel to create the precision machinery. The excavator hasn’t been out in the backfield just yet, but it is getting some attention at the CONEXPCON/AGG and IFPE 2017 conventions in March of 2017.
The excavator project was built through a combined effort from a number of agencies including the Association of Equipment Manufacturers, Center for Compact and Efficient Fluid Power, the National Fluid Power Association, the National Science Foundation and the Oak Ridge National Laboratory. It all began through the research conducted at The University of Minnesota and Georgia Tech. Students there were tasked with taking a current design and then creating a new excavator by implementing 3D technology throughout it.
The question many want to know, though, is why? What can this technology offer? On this specific project, the students were able to achieve a number of successes by manufacturing the machinery out of 3D technology. First, the students at Georgia Tech created a boom and bucket that had fully functional hydraulics. The goal was to design these systems to be lighter in weight, less expensive to manufacturer (with lower costing materials) and more efficient maintenance. Additionally, students from the University of Minnesota focused on creating a heat exchanger and hydraulic oil reservoir alongside a large scale cooling system that all worked to improve the efficiency of the excavator by reducing the overall size and weight of the system.
Even better, when the excavator hits the convention floor, not only will it be on full display, but the teams will be working to build a second one live on the floor. This will help to showcase how the technology works in applications like this.
Amsterdam’s 3D Printed Bridge
Another impressive project using 3D technology is the 3D printed steel bridge that spans across the city of Amsterdam. The bridge spans the Oudezijds Achterburgwal Canal in the Red Light District. The project was done through the Institute for Advanced Architecture of Catalonia. The MX3D bridge is thought to be the first bridge of its kind in the world. Though the organization behind it planned to build it onsite, the amount of pedestrian foot traffic was too high.
The bridge will use industrial multi-axis robots using 3D technology and software to control them to build the bridge. It is expected to be a fully functional bridge for pedestrian use when complete. What makes it an important milestone is that it could help to showcase the cost savings that 3D printing can offer in this industry while still providing a very strong, very durable solution to needs. The project got underway in October 2015.
3D Printed Structure in China
Another project that was showcased in late 2015 was the construction of a 3D printed structure in Beijing. The VULCAN Pavilion is a 26.5 foot long and 9.5 foot tall structure that is said to be, at that time, the largest 3D printed structure in the world. The structure was created by Laboratory for Creative Design. It used 20 3D printers to create the pavilion. Overall, it has 1,023 individual parts that were created and then brought to the site for assembly. The architects created the piece to look as though a volcano was exploding and to do that they had to create a 120 degree arch in the design. There’s little doubt that this type of innovative technology can not only create structures to be more efficient, but also more stunning and beautiful.
What About Google and 3D Printed Buildings?
Though Google would not be the first organization to build 3D printed buildings, the organization may be moving in that direction soon. According to reports from the Milken Institute’s Global Conference in April, Eric Schmidt, who is the executive chairman at Alphabet, the parent company of Google itself, these buildings are the future. Though Google does not say it will be printing buildings, Schmidt makes it clear that this is the way of the future.
This type of technology affords the construction industry with key benefits including affordability, less use of fossil fuels, and improved overall outcomes with more precise footprints and designs. It even utilizes recycled material to reduce waste at landfills. It is less energy intensive, faster, and less costly to build a home or many types of equipment using 3D technology that it is to do so the traditional way. This makes this type of technology perhaps the ideal solution for construction and industrial applications going forward.